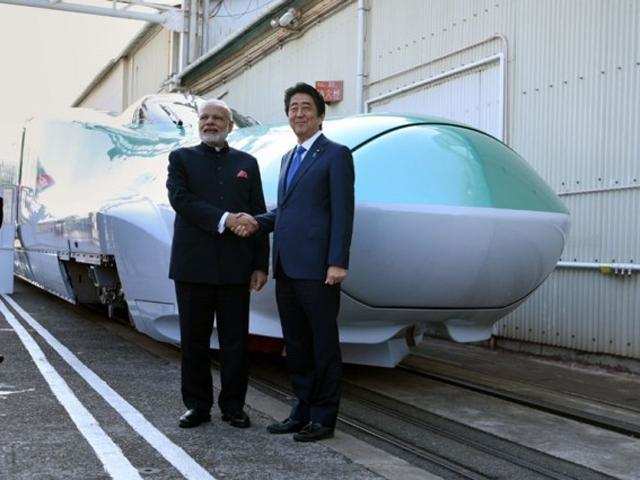 Many of the cargo containers passing through India’s busiest port in Mumbai have a small piece of Japan Inc. attached: Devices from NEC Corp. that can be tracked as the containers rumble through the interior of Asia’s third-largest economy.

The partnership between NEC and the port illustrates the strengthening relationship between Tokyo and New Delhi. Japan is seeking growth markets, while India craves advanced technology and foreign investment. The leaders of both countries, Shinzo Abeand Narendra Modi, are also working to counter the growing regional influence of China — an important economic partner to both but also historically a rival.

“We have the two largest democratic economies in this region, we respect international rules, openness and transparency — these are basic principles that we share,” said Kenko Sone, a former head of global communications for Abe who now serves as minister of economic affairs at Japan’s embassy in Delhi.

Cash Flows
With a young and growing population now at 1.3 billion people, India offers an enticing market for Japanese companies, as well as affordable labor for manufacturers looking even further west to Africa and the Middle East for new markets. India needs an estimated $1.5 trillion in infrastructure investment in just the next 10 years to help modernize its economy and lift more of its people out of poverty.

Japan is pouring money into India. Lending for development, particularly infrastructure, has grown nearly sixfold since 2001, totaling 366 billion yen ($3.2 billion) in 2015, the most recent year for which data is available. The two nations are working together on infrastructure projects that include the $100 billion Delhi-Mumbai Industrial Corridor and a Japanese bullet train to run between Mumbai and Ahmedabad in Modi’s home state of Gujarat.

Foreign direct investment by Japanese companies has also soared, reaching $3.7 billion in 2016, its second-highest level ever. Though it slipped this year, over the past decade it has totaled $25.8 billion, a nine-fold increase over the previous 10-year period. Japanese manufacturers have flooded into auto clusters in Haryana and Rajasthan near Delhi, and into western Gujarat and southern Chennai. 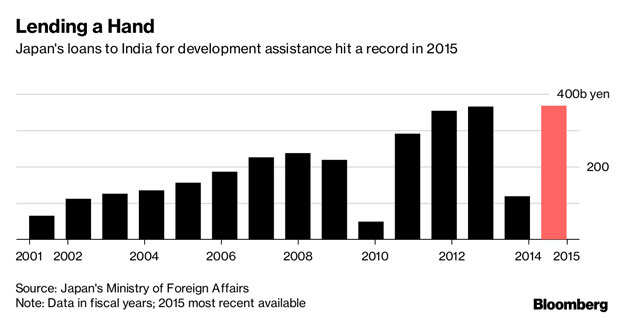 India’s young population is an attraction for Suzuki Motor Corp., majority owner of India’s biggest car maker, Maruti Suzuki India Ltd. The company makes about 1.5 million cars a year in India, but aims to produce 2 million annually in 2020, according to Satoshi Kasukawa, a Suzuki Motor spokesman.

“India’s population is pyramid shaped, and it’s possible for us to provide entry cars to young people,” Kasukawa said.

Japanese manufacturers are increasingly using India to make products destined for other emerging countries. Many of Japan’s major automakers are already selling India-made vehicles in Africa, while Hitachi Construction Machinery Co. has started distributing its machines in Africa after a joint venture with Tata Group went well, according to the Japan External Trade Organization.

With Abe fresh off an election victory and Modi predicted to win a second term in 2019, the alliance between the two countries is expected to grow for years. Political stability in both Japan and India gives the two nations confidence to build deeper economic ties while strengthening the strategic relationship, Japan’s Sone said.

Defense Ties
The two countries are also attempting to rival China’s ambitious Belt and Road Initiative, creating the Asia Africa Growth Corridor in an attempt to grow export markets. Modi and Abe launched the initiative at a meeting of the Asian Development Bank in May 2017 — shortly after China hosted various countries at a Belt and Road forum in Beijing.

Japan also hopes to sell defense technology, perhaps including Soryu submarines, to India as Modi tries to modernize his country’s aging, largely Soviet-era military equipment. They have also stepped up military cooperation, with Japan joining the annual Malabar naval exercises with India and the United States in the Bay of Bengal, designed to protect “shared interests” in the region.

“India and Japan are in a sense front-line states of a rising and more assertive China,” said Manoj Joshi, a distinguished fellow at the New Delhi-based Observer Research Foundation think tank. “The U.S. is an ocean away, the Europeans even further. Both know that by themselves they are not sufficient to balance China, but together they do not look all that bad.”